PROMOTES MEMORY, CONCENTRATION, AND MENTAL SHARPNESS. Pharmanex Nu Skin BioGinkgo 27/7 is a high quality preparation of ginkgo biloba leaf extract for the maintenance of healthy cognitive performance and circulatory health. Pharmanex Nu Skin BioGinkgo 27/7 is recommended for adults who would like to support memory, concentration, mental sharpness, and overall circulation to the brain, arms, and legs.

SIZE: 60 tablets
Manufactured in the U.S.A.

Refer to the link in your market below for precise description and discount price, refresh if you don't see discount. Original Nu Skin Invoice. ✉️ If Wholesale/Distributor price couldn't display, Contact Me !

WHAT MAKES THIS PRODUCT UNIQUE?
NU SKIN BIOGINKGO 27/7 CONCEPT
Ginkgo biloba is the oldest known living tree species, and can be traced back more than 200 million years. The first uses of ginkgo as a traditional medicine was first mentioned in an ancient Chinese Materia Medica published in 2800B.C. Modern scientific research into the benefits and active constituents of ginkgo biloba began in the late 1950s and twenty years of research led to the development of this standardized, concentrated extract from the leaves. Today, ginkgo biloba extract is one of the most widely used botanicals in the world and the focus of extensive scientific research, including over 400 published studies and reports.

If you feel you’ve been slightly forgetful lately, give yourself a mental performance boost. By promoting circulation to the brain, arms, and legs, Nu Skin BioGinkgo 27/7 improves memory and concentration while reducing the incidence of occasional absent-mindedness. Pharmanex Nu Skin BioGinkgo 27/7 is a high quality preparation of ginkgo biloba leaf extract standardized to scientifically supported ratios of 27% ginkgo flavone glycosides and 7% terpene lactones.*

The key active ingredients in Pharmanex Nu Skin BioGinkgo 27/7 are standardized with known content and uniform consistency, and are provided at clinically significant levels. Pharmanex Nu Skin BioGinkgo 27/7 delivers the maximum concentrations of all active compounds as specified by the German monograph standards. The German Commission E, one of Europe’s most respected herbal standard authorities, has defined the active components of ginkgo biloba extract as 22 to 27% flavonoid glycosides, and 5 to 7% terpene lactones.

DID YOU KNOW?
USAGE
Take one (1) tablet twice daily with a meal. Store in a cool, dry place. Do not chew tablet
INGREDIENTS

How is Nu Skin BioGinkgo 27/7 ® standardized?
The German Commission E, one of Europe’s most respected herbal standard authorities, has defined the active components of ginkgo biloba extract as 22 to 27% flavonoid glycosides, and 5 to 7% terpene lactones. Nu Skin BioGinkgo 27/7 is standardized to 27% ginkgo flavone glycosides and 7% terpene lactones, one of the highest levels available in a ginkgo product. This is made possible by a novel extraction process.

*These statements have not been evaluated by the Food and Drug Administration. This product is not intended to diagnose, treat, cure, or prevent any disease.

There are no reviews yet.

Be the first to review “BioGinkgo 27/7” Cancel reply

This site uses Akismet to reduce spam. Learn how your comment data is processed. 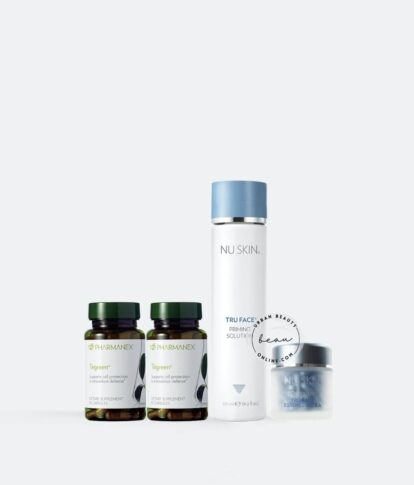